Knox Audiology is blazing into the New Year – quite literally!!  Our hearing centre caught alight from a cigarette causing a fire in the corner of the building with one room gutted.  Incredible gratitude to three passing motorists that attempted to fight the fire possibly saving the building as the fire had reached the roof cavity.

AN unknown trio who helped save a home and a Wantirna hearing clinic threatened by fire are being hailed as heroes by the clinic’s manager.

The fire at Knox Audiology on Mountain Highway started on a neighbouring property because of a stray cigarette butt, clinic director Helen Campbell said. One room at the clinic was destroyed, causing damage estimated at $20,000.

But the fire could have been far worse if it weren’t for the actions of two passing motorists, Ms Campbell was told by the clinic’s neighbours.

The two drivers — one in a black four-wheel-drive, the other in a white van — quickly made a u-turn as the fire rapidly spread from a fence into the eaves of the clinic.

The two men — one of whom was called ‘Steve’ — and a woman evacuated nearby residents and battled the blaze with fire extinguishers borrowed from neighbours.

Because of their promptness in responding to the fire, Ms Campbell suspects they may have had some fire training. “They went way beyond whatever anyone would expect them do,” she said.

It’s believed the couple and the man were not known to each other because they went separate ways after the fire was extinguished.

The blaze started about 4.30pm and was attended by six fire brigade units. Despite the damage, the clinic opened as usual the following Monday.

Ms Campbell said the staff were extremely grateful to the mystery trio to still have a job.

The clinic has a number of charity initiatives it supports through Global Giving B1G1 and Ms Campbell said if the reluctant heroes came forward, she would make a donation to a B1G1 cause of their choosing.

“It’s very hard to say thank you in a big enough way for saving our business, our property and our neighbour’s property. I just want the community to be aware that there are such nice people out there,” Ms Campbell said.

If you are, or know, the mystery heroes, call Helen Campbell at Knox Audiology Clinic on 9800 5697. 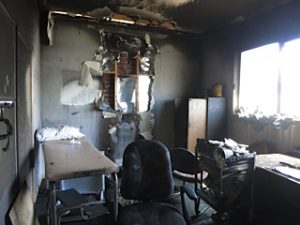 The two previously unknown men who stopped to help put out the fire at the Knox Audiology clinic on January 5th, 2013 have been identified as Phil and Steve!  Wives Sandi and Jo who were also present and assisted on the day were amazed at their husbands courage especially as there was an explosion as they neared the building on their arrival.  Happy Knox Audiology staff together with Paul Dunn Co-Founder and Chairman of B1G1.com presented gratitude certificates to Phil and Steve.  A big thank you again! 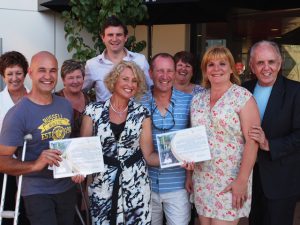 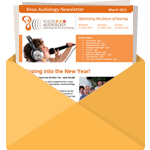 Join our mailing list to receive "Health News" with the very latest news and updates from Knox Audiology. Keep connected to your hearing! Book an appointment today.

Please click the link in the email we just sent you.